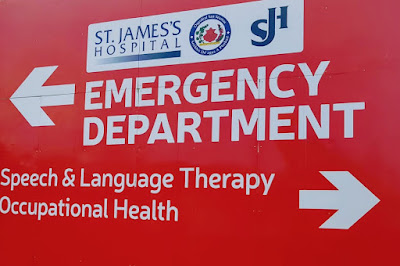 "Something inside so strong"


"A GOOD HEART THESE DAYS IS HARD TO FIND"

Where were we, oh yeah, my heart was in severe failure (see previous post for background). I hadn’t planned to sojourn in hospital, so having finished the book I brought with me, I realized I needed to download some podcasts or movies to distract from the shared television and its constant broadcast of, for want of a better description, ‘old people shows’. I would come to love these shows and I would indeed look forward to the nightly group watching of RTE’s Nationwide. I can now bake soda bread over an open fire, and I could lead you blindfolded through the waterways of Waterford.

Back in the heart unit, the WiFi reception was poor (Yes, these are the tough moments I struggle through). Downloading a podcast, let alone a movie, was simply out of the question. Don’t worry, I didn’t bother the nurses about it, instead I got them to page the doctor (no, I didn’t). The nurses didn’t like me to leave the unit as I had to be hooked up to a heart monitor at all times, however, I had spotted a WiFi router in the corridor and nipped out under the guise of a shower visit.

In something reminiscent of Tom Cruise in Mission Impossible... I flatten myself to the wall, shimmying along until I get to the router and stretch my arm as high as I can to reach the plastic black magic; holding my breath I press ‘Download’ and slowly watch the percent creep up. I know I have about 5 minutes before the nurses start scurrying around looking for me. Sure enough, a person rounds the corner, a St James’s handyman, hammer and spanner in hand, he stops and stares “You alright there, Love?” I explain to him shamefully that I am trying to get better reception for my phone. “Ok Love, but you’re pointing your phone at a shower pipe” ... Back to Nationwide.

I was subsequently moved to a full on Cardiac Ward, where I was given a Telemetry box (a portable heart monitor), and the WiFi was much better. I was able to have lots of lovely visitors and roam the corridors to my heart's delight, but only going as far as the Telemetry box would allow before dropping offline and alerting the watchful nurses. After one grim conversation with my Consultant where the bleakness of my situation was addressed. I took myself and my telemetry box to the quietest corner of the hospital, I crouched outside a cancer ward people rarely went into (or indeed, came out of), I hid behind an abandoned gurney, I rang my husband and I cried my eyes out.

I was only 41 years old, why the hell was this happening to me? I had deliberately taken my heart monitor offline so the nurses couldn’t see my heart rate climb over 160 as my body shook in grief. I let my sobs subside and my heart calm down; my husband Dom was very reassuring, he reminded me that I’d been through worse and overcome, I was strong, these were predictions/averages/statistics, when did I ever fit the mould? I’m an outlier, I can beat the odds, that’s what I do. Feeling encouraged, I got myself together and was walking back to the ward when the nurse rang my phone “Are you ok? You went offline. Don’t go too far away.” ...Oh, I’m goin nowhere, I’m here to stay!

My ward was lined with elderly Dubliners who took turns sitting in the chair beside my bed to introduce themselves and their ails and of course get to the bottom of what a ‘young one’ like me was doing in a heart ward. I never felt so popular! They were all True Blue heart-of-the-rowl lovely gorgeous Old Dubliners. The spirit of this city is alive and kicking within the walls of its oldest hospital! (St James’s actually came into life in the 1970s after 3 old hospitals merged, but those hospitals were the oldest hospitals in the world, or at least in a 3 mile radius).

The leader of the patient pack was a gentle old geezer from Ballyfermot, flanked with tattoos and a cheeky chappy way about him he rattled through his complaints. Funnily enough we were in a similar heart boat. “We’re a pair of walking time bombs you and me” he concluded, “our hearts could explode at any minute”. I gave him the bog standard Irish response that can be used in any situation at any time, “Sure look it...This is it” (it means absolutely nothing, but fills every gap, even the explosive ones).

As he told jokes about his wife, I wondered if it was booze, fags or food that got to his heart. Tut, tut, to me and my judgements as he described his lifestyle - non smoker, a daily open-water swimmer and an avid cyclist, he had actually had his heart attack whilst cycling and refused to stop! Finally he had to be brought to hospital, where he insisted on maintaining his strict healthy diet (only 1 biscuit a day and no eating after 6pm). He had been waiting a month for his operation and was asked regularly if he would agree to be discharged and wait from home, but he feared if he left he would end up at the bottom of the list.

Unfortunately there is some truth in the fear. In-patients take precedence. Holding your place in the operating list by some debatable bed blocking is an unfortunate survival tool. He got his op in the end, they transferred him to fancy-pants Blackrock private clinic and did it there (in fairness to the government they are trying to cut down the operation waiting lists by contracting the private sector for life saving operations they just can’t quite get around to themselves).

There is a madness to the bed blocking though. A young guy came in one evening with chest pain. His girlfriend was a nurse and he seemed to know exactly what to say to get admitted. After running many tests that showed he was A1 they attempted to discharge him the next day, but he was insistent (urged on by his girlfriend) that he be kept in until a Cardiac MRI was done (I couldn’t get a Cardiac MRI and I had a team of doctors trying to rush it through!).

His girlfriend supplied him with bottles of coke and 6 packs of Tayto as they camped out in the leaba. His story was a funny one, after eating a spicy curry he developed a chest pain (indigestion??), he called 999 and went out into the back garden to lie down (what??). He then realized that the ambulance might not be able to get to him, so he got up (hah) walked to the door, opened it, then went back out into the garden to resume his position (why?? Just stay by the door surely)! After a few days of refusing to leave the hospital, a test of some description was performed (‘turn and cough’, perhaps), he was told very nicely that he was fine, he looked to his girlfriend for approval to go, she polished off her crisps, seemed satisfied, and they left.

He reminded me of another young man I came across while I was in A&E. At that point, I had been on a trolley for 18 hours (or was it years), but I had not actually been seen by a doctor yet. S’all cool, I was happy to chill as I understood there were people in more urgent situations coming in by the minute. A nurse did tell me I was calm and stable so would be seen at a later point (damn my calmness and stability!).

The young Northern Irish man who was wheeled in beside me was not calm. He was hysterical. He kept saying his heart was beating out of control, this had never happened before, he was a famous fitness instructor for chrissake. Nurses and doctors were flying around him, checking this, checking that, asking lots of questions. He admitted he had been at a party but had not even had one drink (because he was a famous fitness instructor - okaaay). “My heart, my heart!”, he kept declaring and clutching his chest. I couldn’t resist taking a look at his monitor and noticed his heart rate was less than mine, I couldn’t even get one doctor to look at me! ‘Hhmm,’ I wondered, ‘would it be really bad form if I started clutching my chest and shouting?’ (‘Yes,’ I thought to myself, ‘it would’).

In fairness to him, I should be less judgemental, we all have different histories and physiologies, one man’s diabetic coma is another woman’s snooze.

The Northern Irish guy finally admitted he was off his head on cocaine, his heart calmed down and he was press up’d out the door. What a waste of everyone’s time! And him a famous personal trainer! ;)

There is A LOT of waiting around in public hospital life, but the characters and carry on keep you going. A&E was just a trailer for what was in store for me...