G'WAN THE NEWFOUNDLAND LIBERATION ARMY (they're a thing!)


Newfoundland is like a little piece of home, they have full on Irish accents and they are SO friendly, although some were a bit plastic ;o)


St Johns is as hilly as hell with more pubs than you can shake a stick at (yes, I like to spend my vacations shaking sticks). It was funny to talk to people who sounded as Irish as a bag of potatoes and then find out that they had never set foot in the old country. The reason for the accent is because during the Irish famine (personally, I'm still hungry) the Irish left their home shores in droves and sailed across the sea to Canada and America in coffin ships (so named because so many would die on the boat ride over). Canada isn't a very populated country at the best of times so when the Irish came here they were able to hang on to their way of life from back home without much dilution, including their accents.

This 'preservation', so to speak, was quite remarkable in many ways, there are parts of Canada where Irish is still spoken! If that wasn't astonishing in itself, it is spoken with the dialect from the 1800s. Hence why many Irish language purists have turned to Canada for inspiration as the Irish spoken in Ireland has become somewhat sanitized over the years. By that I mean spellings changed, english words introduced, old words dropped, etc, I guess it promotes homogeneity and perhaps make it easier for school kids to learn.

I must admit I'm fascinated by accents and how they came about, why do people use the words they use, it's  interesting, but I do digress, back to Newfoundland. Oh, on the subject, we were told it's not pronounced NewFOUNDland like lots of Irish people apparently say, it's NewfoundLAND. Okie dokie, easy tiger!

From talking to the locals we did find out that many of them do visit Ireland and I know UCD for example has an exchange program with a Newfoundland university. I think, because of their accents and their 'Irish look' we just don't notice their presence in Ireland as much as we do Americans or Canadians from other parts of the country.

I've talked a lot about the accent and before someone stands on my throat to correct me, I'm sure people have visited/lived in Newfoundland and haven't thought anyone sounded remotley Irish, maybe it's an ear thing. Incidentally, when I was waiteressing in Nantucket during a college summer, on two occasions I was asked was I a "newfie". This is slang for a person from New Foundland, or so I was told at the time. Since coming here we've kinda been told two stories. One crowd say it's highly offensive and is a derogatory term. The other crowd says it's completely innocuous and pointed out signs here and there that were using the word. I dunno, maybe it's like calling and Irish person a 'paddy' it's soooort of OK but depends on the usage.


Surprisingly, given it's a small town, there were a few good museums in the capital St Johns. We even came across an igloo made of books in one, how cool is that. Also, in places, they do have an interesting procedure when crossing the road (all about stopping cars, thanking them etc, heehee, what would a New Yorker make of it).

So alongside this 'Irish' accent, I keep banging on about, they are also heavily into folk music, some homegrown Canadian carry on and some traditional Irish rebel songs. We encountered a shop that was selling musical instruments including 'spoons' yes, spoons. For those of you that weren't introduced to the joys of spoon playing as a Irish chisleur (Dublin slang for 'a child'), you hold two spoons in one hand back to back and clatter them off the other hand and make beautiful music. I can't do it to save my life but my Dad can knock out cracking tunes when he's in the humour. This shop however, took it a step further, they had constructed a devise to hold the spoons for you while you banged away, of course I bought it (seriously, I did). 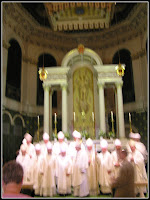 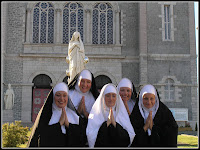 Oh, and the last 'Irish influence' I'll talk about is the fact there appeared to be a lot of Catholic churches knocking about. We came across a college of bishops and a flock of nuns, one was the real deal, one was promoting a new musical, which is which!

We made our way out to a nice fishing village called Quidi Vidi, mostly known for its famous beer (well, that was the impression it made on me).