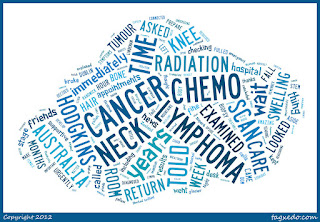 This is my last email from Australia. At the age of 23 I have been diagnosed with Hodgkin’s Lymphoma :o(

I never in a million years thought I would utter the words "I have cancer", certainly not in my 20s. The trip of my dreams has descended into my worst nightmare. The doctors keep reassuring me it's not my fault, it's just bad luck. I'm a fighter and a positive person so I'll beat this, it's just gonna be an interesting ride.